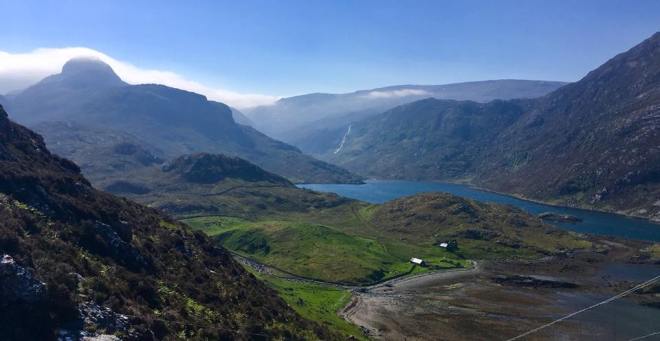 It takes a while to digest something as challenging and tough as the Cape Wrath Ultra. I have spent hours going over the map, dissecting each day’s route and trying to grasp just how far we ran and the kind of terrain we ran through.

It’s a little crazy how one realises just how special, unique and life-affirming an experience is only once you are back home and dabbling in the mundane once more – packing lunch boxes, driving a monosyllabic teenager around, standing at the sink etc.

A CWU finisher who has written about the experience talks of a deep sense of calm she has been feeling since being home. I can attest to that. Whether this is thanks to the 8-day injection of endorphs or just sheer bloody exhaustion, I am not quite sure.

There is also a sense of not really wanting to talk about it all – it all just feels too surreal, foreign, dream-like, detached.

The challenge always with these things is capturing the right words, squeezing them onto the palette and then cobbling them together in a way that paints a picture for the reader – to somehow transport them into the world we inhabited for eight days and to help them relive it all with you.

I usually find the best way to deal with something difficult is to find the humour in it all. So far from a serious, technically accurate race report (which can bore most non-runners – and runners for that matter – to tears), I will attempt to bring the experience alive with a shot or two of humour and a focus on some of the quirkier aspects of a big expedition race such as this.

Although this may sound disgustingly ungrateful, one needs to understand that I would NEVER, EVER seek out and sign up for an 8-day race – not here, not anywhere in the world. Aside from the obvious expense aspect (and the fact that I simply do not earn enough to justify the entry fee), I just wouldn’t see my way past the inevitable physical pain potential. That’s aside from the extensive air travel required (note, I have a pathological fear of heights and being in a metal tube with 200 plus people). Oh… and then there is the fact that I would have to be doing the whole communal living thing with the great unwashed. A challenge for any self-respecting misanthrope.
It all sounded quite hideous to be honest. But good girlfriend that I am, I went along with it with a smile. What a cracking idea. Yes, let’s go run an ultra-marathon every day for eight days. In the mud. With midges.

I was horrendously undercooked for this one. Filippo wasn’t. Filippo invested an inordinate amount of time in some serious back-to-back training, condition coaching, massage therapy and research, time on legs and then some. And it showed. The man ran a blistering race and popped out at the end in 6th overall. I ran at an infinitely less blistering pace, did a fair amount of bitching and complaining (to nobody in particular) and limped in 23rd overall and 3rd woman. This result may appear very impressive at first glance, but not when you see that I was well over an hour behind the second lady and a solid 7 hours behind Filippo! This latter detail is something that I shall never, ever get over. I shall be reminded daily, if not hourly, of this remarkable stat.
The competition between the two of us used to be quite robust. I have indeed been known to beat the bugger in one or two races. Comrades even. After this event, that has summarily died.

For something of this magnitude you really do need to get your shit together. You need to be preparing mentally and physically for at least 6 months. You need to be setting aside most things –family, love, work, play, pleasure, wine, chocolate, life….and just run. Run, run, run a bit more and then run again. A bit like those funny Ironman people I guess. The event must become your be all and end all. Otherwise you are quite likely to stare failure in the face and confront the very real possibility of Dee-enn-effing. (For the uninitiated, that means Did Not Finish. DNF is an acronym that strikes fear in the heart of many an athlete).

I stared the DNF monster in the face a few times in the first three days. And then I decided that – like all the other runners who were also in pain – it would just be better to toughen the f&*k up and get on with it. More of that a little later… 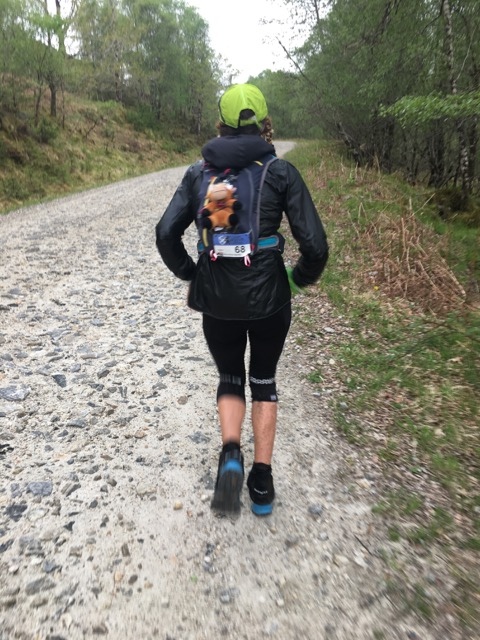 One could write about the route, the terrain, the scenery and the distances forever. I could spend hours using whimsical prose and flogged-to-death superlatives such as gob-smacking, awesome, superb and magical. But I won’t. Because the views were all that and more and photos can only really do them some justice… 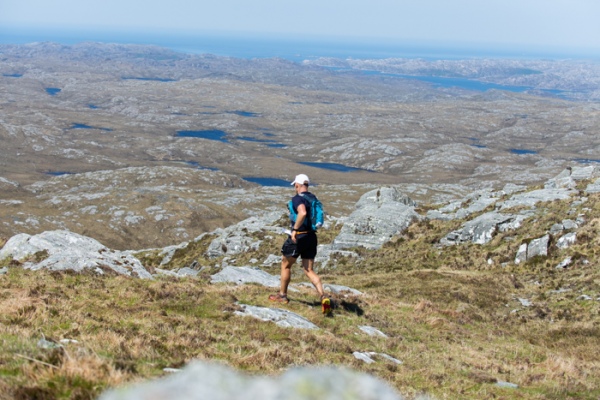 Scotland is a magical, spiritual, ancient place. The fact that we ran through some insanely remote wilderness, where it would have taken 12 hours or more to access and bail out an injured runner made it special enough for me. I love remote. I crave being as far away as possible from humanity. And there were vast sections of this route where you simply did not see, smell or hear any sign of human life. That was intensely beautiful in its own right.

This next paragraph will only mean something to trail runners in SA, so apologies for this. It’s a useful exercise though, and has helped me to get a sense of this crazy CWU monster…

So on Day 1 we ran the equivalent distance and technicality of the Jonkershoek Mountain Challenge. On Day 2 we awoke to the bone-shattering cold and rain and set off to run Marloth (in distance and elevation gain). The day after that, on tired legs, we carpe-diemed the crap out of Ultra Trail Cape Town’s 65k race. A day after that, we smashed the OTTER (oh grail of trail that it is). On Day 5, we charged out of the camp to take on Table Mountain Challenge and then some. On Day 6, we embarked on the PUFFER. Because we can! On Day 7, we dabbled in a little Sky Run Lite equivalent. And then on Day 8, we had a little breather, and did a longer version of the Fishermans Trail Challenge – just a little warm down.

So that takes care of route, distance and elevation gain details. No need to really go into much more on that front…

Onto communal living! The tents were all miraculously laid out and arranged upon finishing each day. The 70-strong volunteer/event team were brilliant in every way. I have never met such a delightfully, cheerful, helpful, funny, efficient bunch of humans ever. Every single day they came out in their blue T-shirts and had a cheery, positive chirp, a genuine helping hand and a big encouraging smile. Testament to Shane’s sterling leadership, I imagine.

Sharing tents at the best of times can be a challenge for one who likes their space and who has a large – read, GINORMOUS – space bubble. And tolerance issues generally. Misophonia actually. Over sensitive hearing and oversensitive olfactory issues. All round baggage really.

So when I was asked to share a fairly small space with 8 other humans, 6 of them total strangers, it was a pretty big ask. But this adventure was all about toughening the f%#k up, remember, so I donned the silicone ear plugs when it was bed time, smiled and carried on. Thankfully for us (and most certainly not for them), we lost 4 of our tentmates after Day 2, so we ended up getting to know 2 wonderful Canadians, who turned out to be the kindest, loveliest people I have met in a long time.
Sleep was tricky for a host of reasons – not least of which was the Scottish sun, which just refuses to put itself to bed! The brain gets seriously confused when at 11pm it’s still light. Hard when an aching body is craving rest and sleep.

People in neighbouring tents also somehow felt that their canvas walls were impenetrable and sound-proof. So we got to hear all robust and lively conversations, very clearly, late into the night. And the snoring. And farting. The latter increased in pitch and cadence as the days went by. I will place the blame for this firmly at the door of the Great Veggie Sausage (GVS). The latter a regular feature of the buffet table. Particularly at breakfast. Those GVSs had a sneaky habit of breaking into the odd stew, lasagne and soup for dinners and lunches. Cunning beasts those sausages.

While on matters lavatorial, one cannot talk about any expedition race of this nature without making mention of the chemical porta-loos. Again, I had to put all sensitivities aside and embrace the concept of sharing 12 porta-loos with 250 or more folk over 8 days. This doesn’t need too much airtime, suffice to say that after about Day 4, a few runners clearly lost interest in the flushing routine. There were indeed one or two times that little confined space was just too dangerous to enter. As a child I developed a rather strange fear of public lavatories, and have never really managed to sit on a lavatory seat. I had to set much of this unhelpful, crippling OCD behaviour aside however. Though I drew the line at using my hand to man-handle the large pump stick mechanism thingy which drew the blue chemicals into the bowl. I used my foot for that. Depending on which day we had run, I had to use a different foot. The one that wasn’t strapped up and toe-nail-less and which was most up to the task.

The walk to the bank of toilets was always quite an amusing affair – placed as they were a fair distance from the main camp and feeding area. As the week progressed, the “porta-loo alley” would be a scene straight out of WW1 trenches – grown men leaning heavily on walking sticks, limping forlornly past, others hobbling zombie-like with midge nets over their heads muttering post-traumatic syndrome gibberish…

One lesson learnt on this one. While standing in the food, tap, washing up or toilet queue, one should never, ever, ever ask a fellow CWU runner this: “How did your day go?” Do that and you’re generally in for something along these lines: “Aaargh, my ankle’s stuffed…..Hmm, torn a ligament in my calf…..Not great, think I’m out…..Bit broken, everything sore …..” That sort of thing.

One rarely had: “Ooooohhh, I had a cracker of a day, jeepers, what a ride! I am super strong! Blitzed that boulder section I did! And, man alive, I cannot WAIT for sunrise tomorrow so we can get stuck into the 76k day!!!!!!!”

Nope, not a lot of that.

Part 2 will involve sordid and intimate details of a bacon smuggler, Filippo’s daily naked post-wash dash across camp, meeting a f(lying) Scotsman in a kilt (who told me a porker about the remaining distance to camp on Day 5), finding sympathy and compassion in a war zone, a brush with hypothermia, hugging strangers, ultra-mail and other tently delights, pain management, prize giving embarrassment and Angus my happy hairy coo companion pictured below in all his smiling glory.

PS: This was a BRILLIANT adventure and I loved (almost) every minute of it. 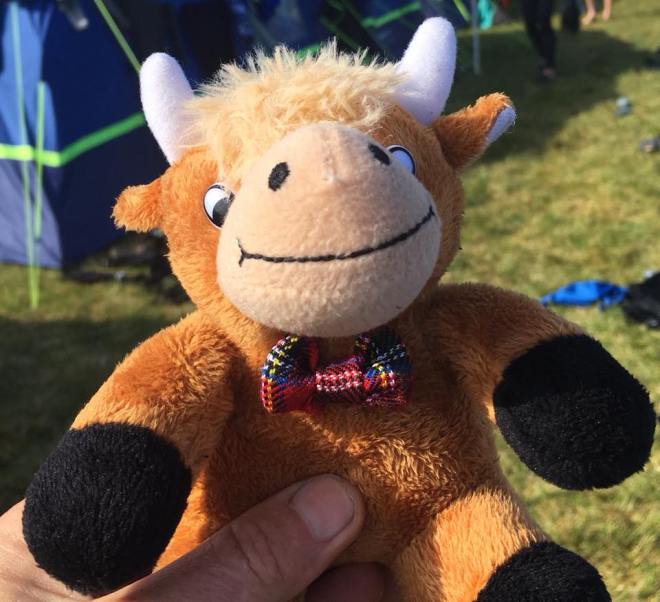