[The unedited version of the article that featured in the M&G today….]

I am sitting in a damp camping chair under a canvas roof. The rain is coming down in sheets, the khaki seams above bulge and occasionally issue an icy waterfall down an unsuspecting recipient’s back below. Desert winds nip at our ankles, howling and snapping at tent pegs and guy ropes. The cold front froths and comes at us out of the gloom, gnashing rabidly, threatening to send our whole tented village tumble-weeding across the mountains, over the Orange River, into Namibia and northwards to Timbuktu.

It feels like we are in the middle of nowhere and, well, I guess we are. We are sitting in a remote corner of the 6 000 km2 /Ai/Ais-Richtersveld Transfrontier Park – a park that encompasses one of the world’s oldest and perhaps most pristine mountain arid regions.

I am with 40 other trail running junkies. We have all completed the 35 kilometre Day 1 of the 4 Day Richtersveld WildrunTM. The sense of shared accomplishment is tangible as we wait eagerly for a hot dinner. The red wine and Arnica oil is flowing as liberally as the tales of extraordinary rock formations, crystal-strewn fields and some rather woeful navigational errors. Shin splints, scratches, sprains, bruises and shiny black toe blisters have been compared and oohed and aaahed over.

No matter how much kneading, pummelling and massaging we apply to both our bodies and the meteorological facts presented to us, the following day’s forecast remains bleak. We are all in for a cold, wet, windy and very long Day 2 in the desert. Yes, the desert.

But for now this seems not to matter as we listen to the mellifluous tones of Pieter van Wyk – a SANParks botanist who has lived in the region all his life. This is a man with enviable and utterly infectious passion. He’s waxing lyrical about the geological history and describing the succulent riches that he has come to know in his 24 years. Pieter has not seen rain this potent for years and is already anticipating the botanical jewels that will emerge from years of oblivion as soon as the sun tickles the grateful rain-drenched soil. Excitement is etched all over his face as he talks about seven-year old kids in the area who have scampered indoors when it rains as they’ve never seen water plummeting from the sky.

What makes the Richtersveld WildrunTM so unique and wild is that the trail is completely unmarked. Runners are given a GPS unit onto which waypoints are loaded and we are told to make our way from one waypoint to the next. Whether we clamber over a granite-clad ridge or shoot down a river valley, it is up to us to figure out the most runnable route.

My running partner’s navigational prowess came to the fore a mere two kays into the race on Day 1. While other runners scrambled up a steep ridgeline, he hung back and nodded quietly to me indicating rather that we cruise up a river valley in the opposite direction. Off we galloped, and about ten minutes later, I was surprised to see the leading male Thabang Madiba (who went on to win the race) bound up behind us.

This was the first of many such route choices, and it wasn’t long before the leading lady tucked in behind Mr GPS, recognising the advantage. It added a certain degree of pressure to things for me, however, and it soon became clear that if I were to lose sight of his rather speedy GPS-programmed rear end, I would disappear into the wilderness and never be seen again. 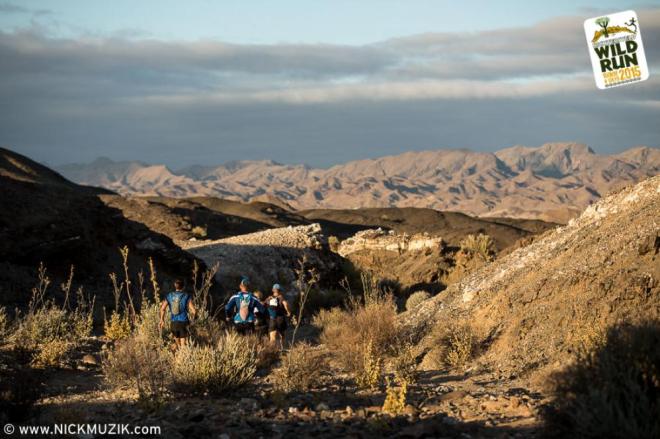 The geology of the area is utterly fascinating. Over 2 000 million years ago, the Richtersveld Earth Dragon awoke from her million year slumber. Her guts rumbled and she issued a colossal burp that buckled the ancient slab of continental rock above her. Red-hot granitic and basaltic magma bubbled out of the vast steaming fissures, and the Richtersveld Suite emerged to the surface. Eons later, the area was blanketed in the ancient Adamastor Ocean. A mere blip in geological time later, large rivers threw down sheets of sandy, calcareous sediment to the shores of the continent from the east. Continental plates butted heads again, the ocean receded and gave way to more buckling and tilting and the sedimentary layers shot up into gnarly mountain ridges. Our restless dragon awoke about    1 500 million years later, exhaled again, her fiery magma breath punching through the sloping sediments and crustal rocks to form the Tatasberg – a 1 000 metre high granite massif. We had the absolute privilege of running through this boulder strewn extravaganza on Day 3.

After a very wet and technical Day 2, we were all very relieved to see the clouds lift to reveal the rainbow drenched glory of our camp at Hakkiesdoring. We charged into and up the Gannakouriep river valley, then faced east to top out onto the vast and spectacular Springbokvlakte, a plateau upon which many thousands of Springbok used to graze. Just after this, we hit the much talked about Tatasberg. We found ourselves clambering and crawling our way through and between giant granite boulders the size of double-decker buses, to emerge at the top where the 360 degree views were utterly magnificent. I was quite literally speechless – and not from the physical exertion!

As if the mountain vistas are not gargantuan enough, there are all the small things to marvel at. Everywhere you look, all sorts of succulents are squeezing their podgy little pink and purple fingers from underneath rocks or snuggling up to sparkling chunks of quartz.

“You have to be on your hands and knees to really see and understand this place”, explains the ever beaming Pieter. “There is so much to learn, to know. There is something under every rock, every sliver of crystal…I read this place like a book”. On our third night in camp, he addresses us all again. More stories, more wonder.

A self-taught botanist who reels off scientific names with consummate ease, Pieter goes on to tell us about the endemic succulents in these parts. He talks about the Lithops (or living stones) that often grow in close association with the micro-climate created by a sliver of quartz. He tells us about minute plants with a transparent “window”, beneath which lies a small crystal embedded within its flesh to reflect sunlight to less exposed parts of the plant where food is made…all in a bid to reduce surface area and minimise water loss. Pure evolutionary genius.

He reels off exotic and somewhat subversive plant names, translating from the Afrikaans as he does…. “perfume bottle”, “child’s penis”, “old granny’s tits”….

He enthuses about the extremely rare Pachypodium namaquanum, an 800 year old spike-studded succulent with an elephant-like foot and a quaint north-facing tilt to the rosette of leaves at its tip. It looks uncannily like a lone man standing facing north, which is why it is also called Half mens. He tells us we will be coming eye to eye with these very special plants on our last day. And that we did.

Pieter tells us about the creatures found here. We are all riveted. “We have about 30 species of Toktokkie here, and like most other desert beetles they have a waxy covering that controls water retention and body temperature”. Some insects, he tells us, even have the capacity to actually make their own water.

Pieter modestly lets slip how he discovered a new species of spider a few years back. There are, he explains, 18 species of scorpion in the park. One of these endemic whipper-snappers is almost as large as a dinner plate! He tells us about the Namaqua chameleon. Just short of the length of a Shatterproof ruler, this little guy packs some punch and has been known to hold his own against crows and Cape cobras. They breed them tough as nails in these parts!

The WildrunTM team really are the crème de la crème of trail race organisers. Great care is taken to provide just the right measure of luxury for weary trail runners. The tents are robust, yet comfortable, there are canvas toilet cubicles and showers every day with donkey-boiled piping hot water. This is all set up effortlessly in the middle of nowhere. Each day the entire camp is whipped up in a new spot and always in time for the front runners to run into camp and chill.

This was trail running at its wildest, most extreme, most luxurious and insanely enjoyable best.