Something deep, primordial, an ancient call

She answered, and left her weightless world

For the uncertainty of the shore.

How heavy the burden of herself became,

the massive shell, the tapered limbs

That scratched and clawed for purchase in the too forgiving sand,

and alone she bore, amidst the shadowy terrors

Of an alien world seen through eyes already tearing.

A few weeks ago, we were incredibly privileged to spend a week up in Maputaland in the north-eastern corner of KwaZulu-Natal. The region – which nudges up against the border of Mozambique – is relatively unpopulated and the coastline boasts some of the more pristine and undeveloped beaches, dunes and sub-tropical forests in the country. These glorious skeins of golden sand thankfully fall within a protected marine conservation area. For a very good reason… 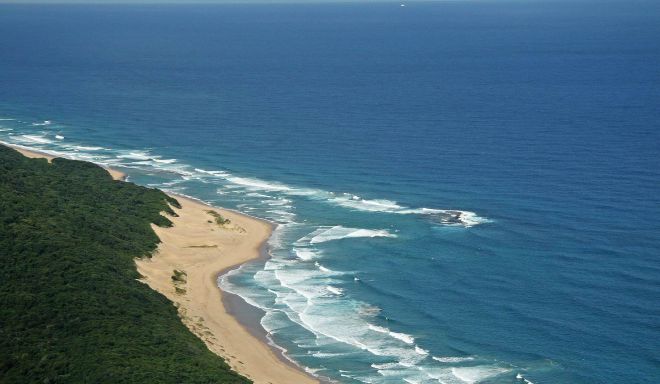 Our mission? To seek out and observe nesting turtles – loggerheads and leatherbacks specifically. The area is famous for its healthy nesting turtle population, and the November–January period is peak nesting season. We did not want to join the organised vehicle-based turtle tours which were on offer every night, preferring instead to go on foot and in our own time. In the 6 days we were there, we walked and ran the beaches flat searching for turtle tracks and covering a total of about 100 kilometres. We generally set off later in the evening after 9 pm or first thing in the morning (the alarm was duly set to ping at 3.45 am!)

On days 1 and 2, we returned from our night-time and early-morning forays disappointed.  On Day 3, however, we were rewarded quite spectacularly. We had set off in the early morning gloom. Torchlight was unnecessary as the moon was still quite plump. A little over 600 metres from where we were staying we could make out the riffles and dips of a dark shadowy trail in the distance. We quickened our pace and soon stumbled upon a vast, fresh tractor-like track heading up into the dunes. A quick check beyond to see if there was a return track…no! Heart rates immediately rocketed, as we made our way quietly up the beach. In the distance, up against a sand bank, we could just make out a big moving shadow. Yes – at last!

Being so close to a wild creature this endangered and this magnificent is quite life changing and emotional. One knows that the most respectful thing to do is to keep one’s distance and respect her while she goes about the task of laying and covering her nest. At the same time, there is also an overwhelming desire to get up close and to just feel her energy. I very quietly and carefully stroked her lightly on her back flipper and then placed my hand on her shell – just for a moment. I then stepped back, sunk into the sand, held my breath and watched her.

Sandy strings of mucous clung to her mouth and her eyes seemed to be weeping slightly. In the fading gloom, I watched her mouth open and close occasionally, and listened to her straining rhythmic breathing. Every laboured, rhythmic sweep of her powerful back flippers seemed to take it out of her. She had already delivered her precious clutch into the 80 cm deep, cool sandy womb further up the beach.

From an evening encounter with a laying female later in the week we learned that the soft-shelled eggs are gently dropped into this perfectly excavated hole, her back flippers acting as tunnelling guides. The ping-pong ball sized eggs have a unique mineral structure which prevents breakage on impact with the rest of the clutch. Turtle eggs are said to be so yielding that one could bounce one off a hard surface!

We suspect our female had laid her eggs quite a while before we arrived and had moved away from the actual nest. She was now disguising the site and creating as much diversionary disturbance as possible – digging, spreading, turning and weighing down patches of sand away from the actual eggs. Researchers in the area have watched some leatherbacks spend up to two hours after laying disguising an area of up to 100 m2 in an effort to confuse and deter predators.

I had such a ridiculous desire to look into her eyes and connect at some level…oh to just have a conversation with a creature this wild and mythical! For her to tell me her story, to share her turtle adventures in the big seas, and for me to try and reassure her that every single one of her perfect leathery little progeny would make it into the surf in two month’s time.

What I didn’t want her to know was that of the 1 000 hatchlings that enter the sea, only two reach nesting maturity. But my guess is she’s well aware of that – hence the healthy clutch of 100 or more eggs!

We watched her for over an hour – the sun was inching its way up behind the quivering sea beyond and the clouds were turning pink. We started to become quite concerned that she was still exposed and likely to be out on the beach in broad daylight. Some internal chemistry was telling her to keep confusing all those faceless predators – ones she would never meet. 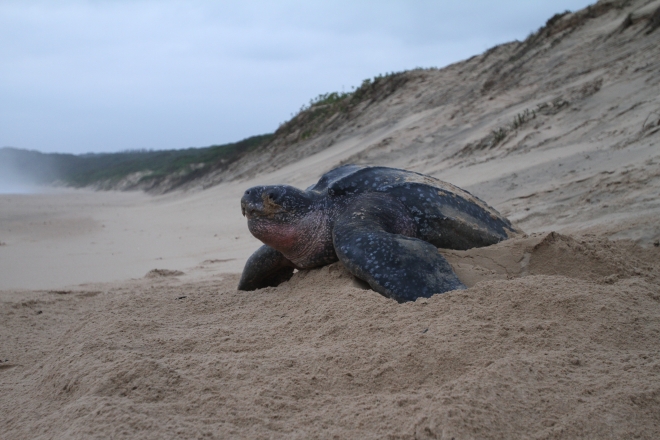 We watched her, breathless, perform the rite,

Marveled at her close-lidded patience, her energy,

Of utter exhaustion, the unrelenting will

that rendered her oblivious to all

Save her pearly charges’ burial

We fondled her leathery skin,

Gazed into her eyes admired the thickness of her wrinkled neck,

and thought deeply of the soft expression on her darkened face.

As George Hughes observes in his book Between the tides: ‘There is no room for sentiment ….once the eggs have been laid, they are on their own’. Yet despite this harsh reptilian parenting reality, one cannot help be completely in awe of the degree of dedication and meticulous attention to detail around the nesting process. There are no half measures here, no ‘quick let me just get the job done and head off back to the sea where it’s easier to move…’.

It takes a female 25 years to reach nesting maturity. That is over half my lifetime! After all those years out in the Big Blue, she just knows it’s time to procreate and make the epic journey onto land to usher forth another generation. And she does this up to four times in a single season. 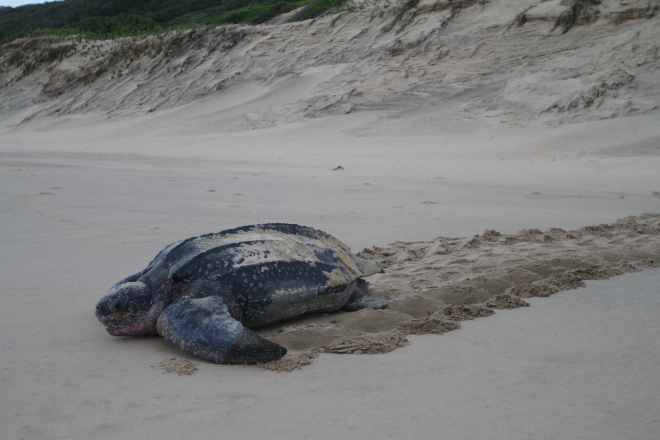 Eventually our turtle turned her massive bulk around, harrumphed her way over the little sand dune she had created, pointed her beaked face towards the white-tipped waves and started her homeward journey. She seemed to be energised by the downhill stretch, the sight of the waves and the harder sand. She heaved her (possibly) 400kg+ frame down the beach, stopping only occasionally to catch her breath. We watched a wave lick the sandy mucous from her face, another wash the sand off her carapace, and yet another engulf her completely. I swear I saw a hint of a smile just before her head dipped below the final wave.

And then she was gone.

The deed was done, the sand replaced,

She joined the sea again,

And we waded with her to the edge of our world,

Saw her graceful form retreat into the darkness

In silence, we filled her clumsy tracks,

Erased all trace of what we’d seen,

And dreamed of another cosmic night

When sand shall scatter, and the sea

Shall open up her arms to turtle minions…

I wished her well – out loud, but my words were whisked away from my lips in the early morning breeze. The cynic in me couldn’t help feel a sense of great longing as she disappeared from view. I felt I had lost a friend and there was no way I could or would ever see her again, know where she is or how she would fare. 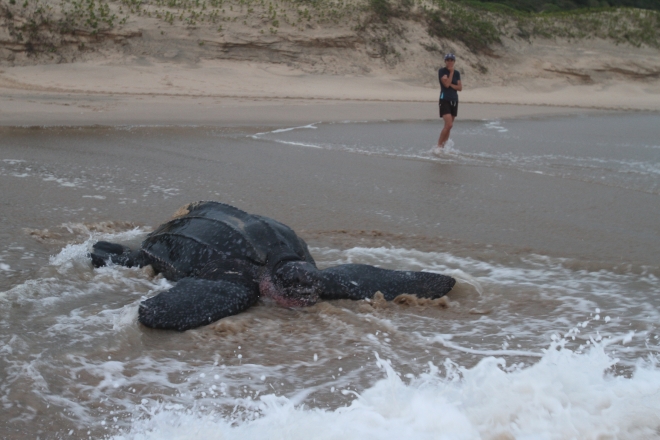 I corresponded with George Hughes after this encounter and was delighted to hear that in the 50 years working with these animals he has NEVER encountered a leatherback on the beach in the daylight hours.

Once she had gone, all I could think about were the dangers she faced on her return to the ocean… from all-consuming fishing nets and the horrors of bycatch to the equal horror of long-line fishing….from warming oceans and fickle, schitzo-currents to the ever-growing tsunami of plastic.

A day or two later, while walking along a 1.5 kilometre stretch of beach between Rocktail Bay and Thonga (all prime nesting beach), we managed to collect two large black garbage bags of plastic – all in the space of an hour. Our harvest included ten cigarette lighters, an untold quantity of drinking straws, bottle tops, shoes, bits of plastic crate, fishing rope and plastic bottles. What was perhaps more alarming were the miniscule chips and particles of colourful plastic – bigger items that had become brittle and broken down over the years – becoming one with the sand and shells.

George Hughes agrees that plastic waste is a massive threat to turtles globally. Hatchlings tend to ingest anything that looks edible – these very small plastic pellets for example. Adults have also been known to ingest large sheets of plastic and plastic bags. These block the gut and lead to tragic fatalities. Hughes has come across many examples of plastic ingestion in the five decades working with turtles. In one particularly severe case, he came across an adult leatherback which had been caught in the shark nets off the KZN coast. It died shortly after being brought to the research institute where he was based at the time. When dissected, Hughes’s team unravelled a solid 3 x 4 m sheet of heavy plastic. Frightening stuff.

Sadly the oesophagus is designed in such a way that once an item of plastic has been ingested, there is no way for it to be regurgitated and it has to be swallowed completely. Once lodged in the gut the animal is quite likely to starve to death or suffocate.

On a more positive note, the conservation status of the both loggerhead and leatherbacks has seen dramatic improvement over the past few decades. Protection of nesting females began in 1963 when a paltry 5 nesting females were recorded in the entire 1966 season. The decline was almost certainly caused by the relentless harvesting of eggs. Numbers of nesting females has thankfully grown steadily – up to a remarkable 168 in a single year!

Encounters such as the one I describe here leave one with a heightened sense of personal caring and responsibility for endangered creatures – all over the world. On one of our evening meanderings, we came across one of the lodge vehicles, guests offloaded and surrounding a laying female leatherback. It was great to watch her eggs drop into her meticulously crafted hole, but sharing the experience with several others (too many perhaps for my comfort levels), took away so much of the magic for me. There is a loss of dignity somehow, when guests pose behind the female to get that all essential Facebook shot and I felt that there insufficient respect for her space and need for quiet.

Of course, I realise the importance of the tourism element in the conservation of these extraordinary animals, so it was great to see foreigners and locals alike enjoying the experience. As long as the encounters are carried out sensitively (and married to the excellent data collection and conservation efforts initiated by Hughes), then I am all for it. The more people can experience and treasure such a rare and sacred moment, the more likely they are to feel the visceral need to help secure the future of these magnificent animals and their fragile ocean environment.

Thanks for F Faralla for the pics.