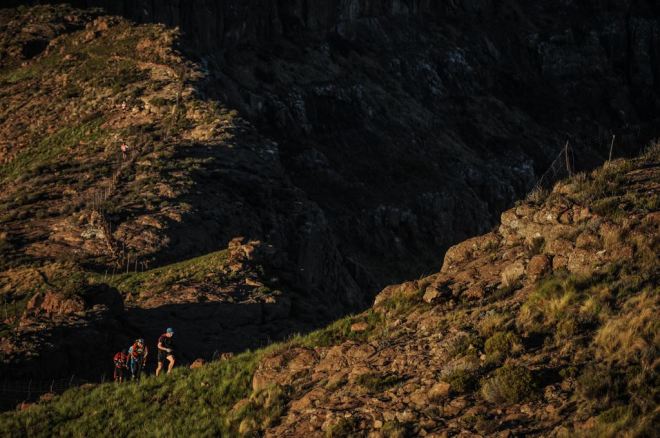 My last blog was about a race in beautiful big-sky Drakensburg mountain country. This past week saw a return to the very same wilderness playground. Once again, I was blessed with a very well-priced entry offer and opportunity. Having committed months back to going upcountry to support anyway, it seemed a bit of a no-brainer to just enter and run it too.

This was a race I have heard so much about, had always revered (and considered a little bit out of my league), so it seemed too good to be true to pass up on the chance to partake.

Friend and partner Filippo – a seasoned Sky runner – has spent many hours scouting the route. He’s plotted and planned, gazed lovingly at the route profile, researched alternative paths and spoken to local landowners. He’s run the race three times and always done well. In the ill-fated 2013 event, he ran 75% of the route in some of the severest weather conditions – helping to guide fellow runners off the mountain when the organisers cut it short. In the 2013 race, two of the winning elite runners were taken off the mountain with serious hyperthermia.

I was in damn good hands, in other words. This was a massive comfort to me – given that I have never run an unmarked race before and (horror of horrors!) have never used a GPS.

As a fiercely independent person, I needed to know that all would be well if I were to end up alone on the mountain for 12 hours – convinced as I was that my self-appointed guide and race-day hero was going to get thoroughly fed up with my pace and want to bolt off into the distance to claim a podium spot. This was despite his endless assurances to the contrary.

I spent an hour or two the day before getting to know my borrowed GPS unit and tried to get my technologically- challenged brain used to the rather uncomfortable process of having to look down and check my wrist to ensure I was still on track and not about to run off a cliff. It definitely took some getting used to, and I’ll have to admit, my nerves were well shattered.

Everyone talks about the remoteness of this run, the altitude, the potential to take a wrong turn, get hopelessly lost. A conversation with a local farmer in the car en route to the race start in Lady Grey did little to stitch my frayed nerves together. “These are serious mountains”, he says, “you can’t mess around….people can die….you have to know what you’re doing or you’re stuffed…. last year the conditions were so severe, that I got lost for hours trying to find two runners in distress….and I grew up here!”

Race morning dawned and at 4am (!) and I found myself standing at the starting line alongside 72 other Sky Run Lite runners. We were only doing 65 kays. The other intrepid 134 guys and girls were bravely taking on the Big Daddy: Sky Run Proper – a thoroughly daunting 100 kays.

The first leg is steep and dark. Runners and their bobbing head torches jostle and vie for a spot along a nasty, endless and uncomfortable rock-strewn single track. The odd mutter and grumble and a few sharp words from one runner to the next as race morning frustrations blur all logic and there’s a crazy urge to overtake and charge up ahead.  After about an hour, the dawn light seeps through, torches are switched off and the mountain tips turn orange.

After a fairly tough 7 kays we reach Check point 1 (the Tower). I catch a glimpse of Salomon ambassador and Sky record holder Ryan Sandes who has come out to support. We shout our race numbers out to a marshall with a clipboard and off we go.

A further 14 kays on we hit Check point 2 (Olympus). There was a bakkie with a large tank of water and a pipe and we took the opportunity to fill our already depleted water stocks and try and throw down some food.

Another 8 kays on we hit Snowdon – here we had to unpack our kit and show all our compulsory equipment and gear to a kit check guy. One or two runners were ‘man down’….having feet strapped, asking for headache pills or claiming they were vomiting and not feeling good. Heads down, carry on. 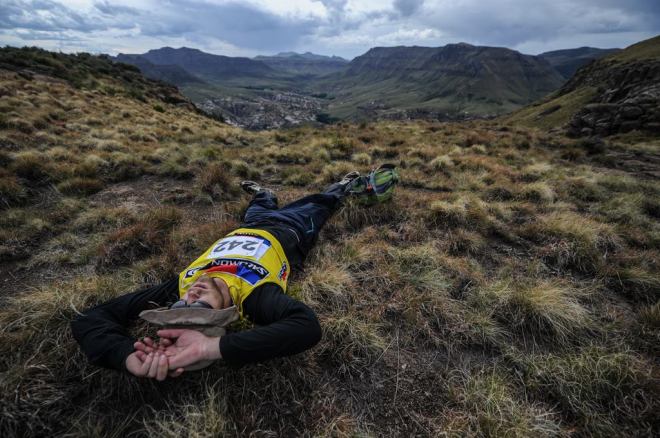 And on we ran….again, our navigation GPS master at the helm, showing me (and a few hangers on) the quickest, safest route into increasingly remote countryside. At times I would question his choices as they seemed completely illogical – I even had the gall to dispute one call to leave a clump of runners and head in the opposite direction! At this point, a wonderful chap who had hooked in with us from very early on put me firmly in my place and humbled me into submission…. “That guy ahead of you Karoline…..that guy. Shoo, he’s an expert. I trust that guy man – you’re damn lucky to have him as your coach!” (Thanks Mazu!)

We then hit the infamous and much anticipated ‘Dragon’s Back’. What a glorious, glorious section of the mountain! This had to have been the highlight for me. I was so enamored with her I whipped out my cell phone and tried to capture it all on video. Tricky thing to do however – running to keep up and take a video, that is – particularly when the air is a little thinner than usual and the wind is tugging at your feet.

Turned out to be an epic fail, sadly – my footage mainly of my shoes and some gasping and panting in the background. I had pressed the record button thinking it was the ‘off’ button.

The name Dragon’s Back could not be more apt. It was exactly that. It feels as though one is sitting on her, legs clinging to her heaving flanks, dodging clouds, her massive tail swooshing behind. She’s a friendly dragon too. I really felt that. She wanted us there and was doing everything in her power to keep us astride. Not an easy mount, granted – sheer drop either side of her, and levels of exposure second to none.

But compared to the mountain we were set to meet a couple of hours later…… she was a delight!

After this highlight, it was all down, down, down. Well, relatively speaking. A few ups between, but mostly down. Mr GPS still working his magic and along the way, many fellow athletes hooking in to make the most of his route knowledge. At one point I could have sworn I was running behind the Pied Piper .

Check point 6 is Balloch – a spot where most runners stop for a bit, refill, chill and enjoy a bit of pampering from loved ones and seconds. With 58 kays in the bag, one is grateful for the rest…

While we were heading down the fairly steep descent into Balloch the heavens had started to darken, growl and grumble. Ominous thunder and the snap, crackle and pop of electricity in the air made me nervous. We were about to make a vertical 500m ascent up ‘The Wall’ to find ourselves on a 2 400m ridge – perfect target for a well-placed lightning bolt! 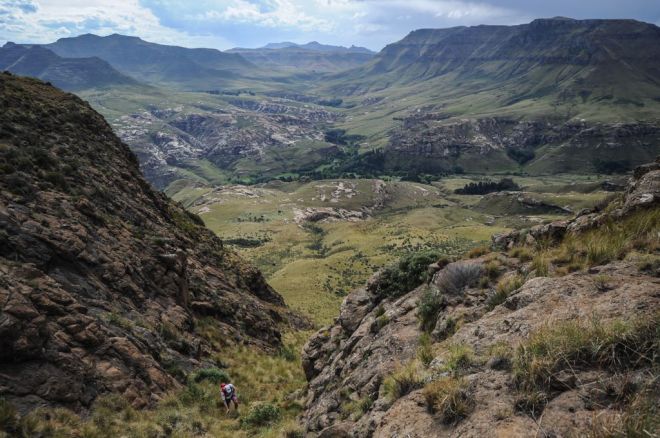 Balloch was a Bitch. No other words for her. Where the Dragon had been friendly and youthful in spirit, this snarky little cow was just grumpy. Her mood mirrored mine. She tore at my hands and my fingers bled… barbed wire strewn across her paths tripped me up, I picked it up and tried to toss it aside, but it clung to me snake-like and I wrested and swore at it to get off me.

She was the playground bully and I fought back like a child. I kicked and screamed even sat down and wept for a bit. I swore out loud like a fish wife….something foul along the lines of “You f*&king wanker mountain”. I was reminded of these words later that evening.

Not pretty. I even kicked at a few rocks. As one does…

And then we were through the hole in the wire at the top, over and out.

By now my toes were on fire and blisters were blowing up, popping and rubbing – perhaps less as a result of the rock kicking episode, and more due to ill-fitting shoes and gritty, wet socks.

The descent was painful, but by now I could see and smell the finish at the Wartrail country club…

Not so Mr GPS. We parted at the 63 kay mark. He went on to run a further 37 kays – into the growing darkness. He had another 7 ½ hours of slogging it out alone! (Rumour has it …in true ‘Loneliness of Long Distance Runner’ style, the man later had a long conversation with a black sheep on his way up Bridle Pass! As one does…)

I was just grateful to see the Salomon flags and banners and my last 2 kays were comparatively fast on gloriously comfortable dust road. I came in second overall and first lady in a time of 11:03.

Remarkably, about an hour later after I finished my little jaunt, in trotted Ian Don-Wauchope who bagged a new course record for the full. What an absolute legend! My respect to him, to Landie Greyling (winner and new record holder) and ALL the runners who completed the full knows no bounds.

[With huge thanks to the pro photographers (Craig K et al) who took most of the excellent pics here!] 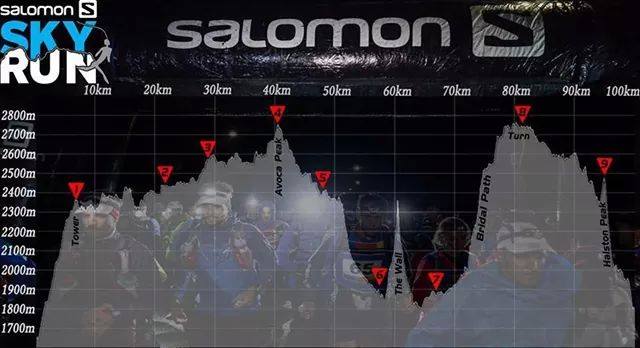