We have just returned from a wonderful time away exploring a few hidden (and relatively untouched) corners of this amazingly beautiful, diverse and surprising country.

I am going to kick-start this blogging year with some reflections on how some of these forays into these wild and woolly places brought on a remarkable change in our nine-year-old. His creative juices seemed to flow uncensored; he relaxed, seemed happier and made the most beautiful things.

We spent time swimming and canoeing in rivers, hiking on beaches, splashing in the warm Indian Ocean, sloshing about in thick river mud, watching clicking crabs and slurping prawns out of their murky depths, exploring the leafy, damp depths of thick coastal and riverine forests and swinging high within and between the vast creaking arms of ancient trees.

We rode horses (without conventional bridles and bits). We also rode and walked alongside African elephants. We met some amazing people who have a deep love and respect for these animals and who work with them in a way that uses the power of intention and a deep understanding of their instinctive/natural ways as opposed to cruel force and domination.

We stayed in some remote and rustic places – one or two of them fairly basic and without electricity. Our nights were lit by paraffin lamps, our showers either cold or heated up only by first lighting a fire and revving up a donkey boiler. 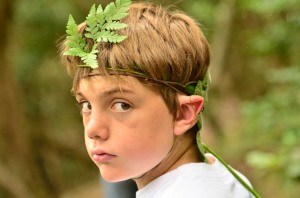 The first of Tim’s creations emerged after one of our forest walks in the Wilderness area. Before we knew it, he had fashioned a little forest elf hat out of ferns, stems and twine. This he wore for the rest of the day – much to the gentle amusement of those we passed.

The second came out of a walk along one of those endless windswept Transkei beaches. This time, Tim quietly gathered up a random selection of driftwood sticks. He refused to tell us what he wanted to do with them. A surprise, he said.

That afternoon he sat with his knife and some fishing twine and within about half an hour had created a beautiful bow and arrow – the arrow perfectly whittled at the tip, with a neatly crafted slit at the end to fit the bow.

This was used on our first forest walk in Hogsback…when we were out searching for Hobbits! 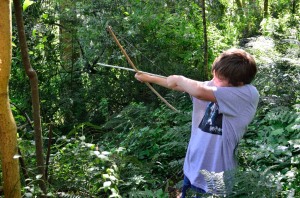 At our next destination, and after another long drive, he hauled out his knife and fishing twine and started whittling away at the various bits of the bow and arrow and again – with zero intervention from us, he had fashioned a fascinating musical instrument. A kind of African guitar, which emits two tuneful notes when plucked along its two taut strings. 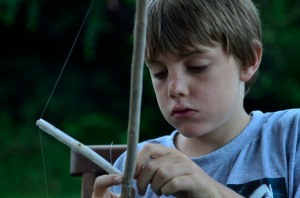 Our final evening was spent in a glorious Karoo farm, the ancient farm house overlooking the Gamka River with its craggy steep echoing sides. While we sipped our wine and marveled at the warmth of the stoep soaking into our bare feet, the fading sunlight touching the aloes, and the vastness of the sky, Tim vanished into the scrubby Karoo veld.

He returned armed with scraps of iron, rusty wire, a bone, a stone and various other gnarled fingers of farm detritus. He then proceeded to create the most beautiful mobile/wind chime – his bare hands twisting and bending, cheeks puffed out with concentration. 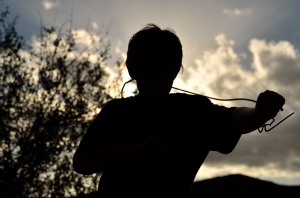 The end result is completely beautiful. It hung on the stoep, the warm Karoo wind making music with it throughout the night. It now hangs on ours at home – a wonderful momento of a beautiful evening.

Later that evening, Tim and I went around the house lighting the paraffin lamps before the darkness seeped under the doors. He then went off to help his father light the fire under the donkey boiler.  No electric switches, no television, no ipad, no cell phone. None of these hideous modern imagination slayers. These sensory thieves.

That night we all sat together and soaked it all in….the crackle of twigs, the smell of wood smoke, the fading distant chirrup of the kingfishers in the valley below, the hadedas cackling as they winged their way to bed, the crickets humming and the jackals calling to one another.

All of them telling stories – the subplots of which we humans could never fathom. 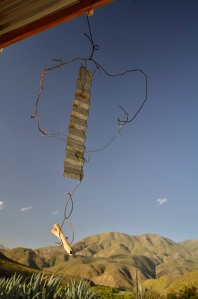 This degree of creativity, independence and contentment is a fairly rare commodity at home with this little boy. I am not sure what it points to. But I imagine it has a lot to do with a “tuning out” – a shutting out the noise that is “civilised”, modern fast-paced and pressurised life.

There really is much to be said for spending more time in remote places. Especially for children. To be in places where one is forced to really fine tune all five senses; to become aware of what it takes to generate light and warmth; to invent, create and to really look and be in awe of the natural world.

In blogs to follow, I will share more on the extraordinary rivers and indigenous forests and the creatures we heard and saw. I also want to share the mind blowing interaction with three truly magnificent elephants…